The Brotherhood of Saint Andrew is an international, evangelical outreach ministry of men and youth in the Anglican Communion and beyond. Its corporate offices are in Louisville, KY.  The Brotherhood was founded by James Houghteling in Chicago in 1883 in an effort to get men back in church with their families and to make them an active part of their parishes through their three disciplines of prayer, study, and service. The organization was incorporated by an Act of the United States Congress and signed by President Theodore Roosevelt on May 30, 1908. That Act states, “The sole object of said corporation shall be the spread of Christ’s Kingdom among men”. The Good Shepherd Chapter was initially installed in September of 2003.

The Brotherhood is routinely involved in various activities in our Parish including our annual Saint Andrew’s Day Luncheon in November supporting Deacon Carl Dunn’s “Camden Christmas” to bring Christmas to the children of Camden, NJ.

The members of the Brotherhood frequently are asked to perform service tasks for the Parish and for members of the Parish, such as Holly Fair and greening of the Church. Outreach projects have included a multi-year facelift of the sanctuary at St. Paul’s in Camden, NJ, culminating in the receipt of “The President’s Volunteer Service Award”.

Monthly meetings are held on the second Wednesday of each month at 7PM in the meeting room. These meetings incorporate prayer, study, and service oriented discussions to uphold the three disciplines of the Brotherhood. We are committed to the spread of Christ’s kingdom through our thoughts, words and deeds.

Get the weekly service bulletin and trifold.

See recordings of past services. 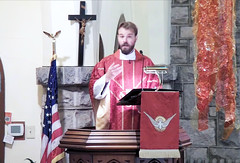 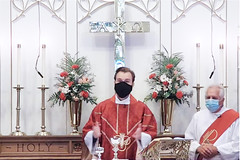